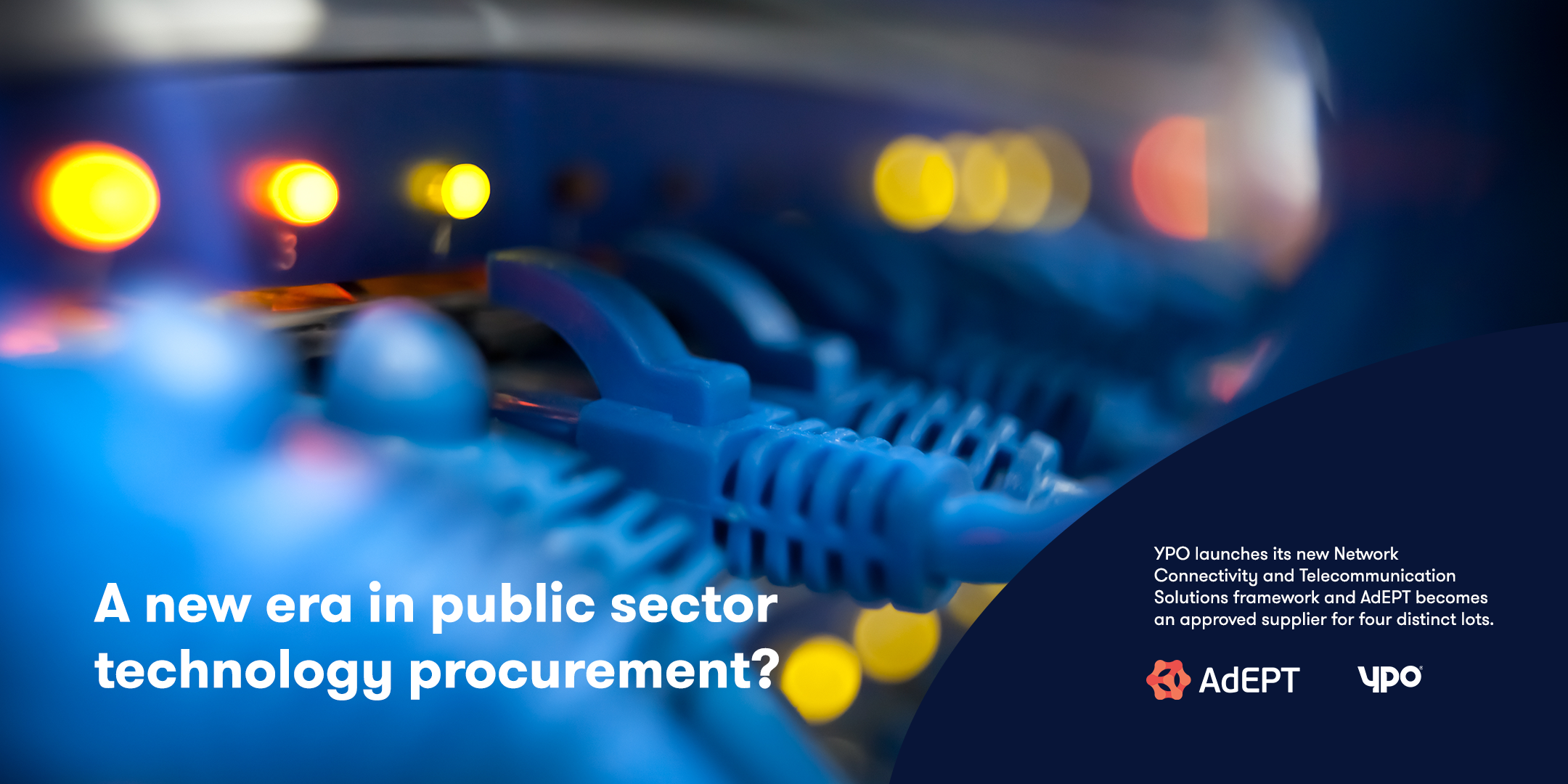 The initial response to Covid-19 has given way to longer-term changes. And YPO, which has just launched a new technology framework – and welcomed AdEPT as a new technology supplier on this framework – can help public sector procurement professionals to buy better in this new era.

Public sector procurement professionals sourcing IT to help in the transition from short-term to long-term Covid-19 response might be interested in YPO, its new technology framework, and a new supplier member, AdEPT Technology Group.

Following a downturn in public sector technology spending in the first few months of the pandemic, it appears that such spending is starting to return to pre-Covid levels, as highlighted in Government Computing’s procurement tracker, and supported by Tussell’s findings that invitations to tender (ITTs) have started to rise.

But contracting authorities are far from out of the woods. And with the challenges of Brexit ahead – as well as a backdrop of digital transformation, years of austerity and a continual drive to do more with less – procurement’s critical role in the delivery of public services has once again shifted up a gear.

And this is where YPO, and its partners like AdEPT, can be of great help.

Being owned by 13 local authorities, YPO has a real, first-hand understanding of the public sector. Likewise, being an independent IT services provider with a long history of working with the public sector, AdEPT knows only too well the immense challenges facing those who serve our communities.

“It’s about appreciating that these organisations have a different culture than we see in the private sector. At its heart is a desire to make a difference to the lives of people everywhere – and that’s the case whether you’re a social worker out in the community, or an administrator in the office.

“Clearly, the role of the public sector has been in the spotlight this year, perhaps more than ever – and rightly so. But as a technology company that works with both the NHS and local authorities, we’ve seen the pressures on both frontline staff and those who work behind the scenes.”

For Garry and his colleagues, those who are serving the public out from the spotlight include IT professionals, who have been central to keeping organisations connected and fully functional throughout the pandemic.

It’s a framework that’s been designed with a first-hand understanding of public sector IT procurement, as explained by Robyn Lamport-Rann, YPO Category Buyer – IT.

“This framework was launched following customer demand for an easy-to-use and compliant route to procure network and telecommunications services,” she said. “It includes all the latest technologies that any organisation will need in their progression to digitally transform and improve communications.”

As well as being owned by 13 local authorities – meaning its profits are returned to the public sector – YPO works with 71 associate authorities throughout the UK, and having been established in 1974, has helped local government through huge political and societal shifts, as well as the advent of the internet and the huge changes it has brought about.

It is one of the largest public sector buying organisations in the UK, but it retains the ‘make a difference’ culture of local government, which perhaps sets it apart from the Crown Commercial Service (CCS).

“We can’t lay claim to the being the latter, but we hope as much as possible that our solutions are very much built for local government, and we look forward to demonstrating that, through YPO, in the future.”

AdEPT Technology Group plc is one of the UK’s leading independent providers of managed services for IT, unified communications, connectivity and voice solutions. AdEPT’s tailored services are used by thousands of customers across the UK and are brought together through the strategic relationships with tier-1 suppliers such as Openreach, BT Wholesale, Virgin Media, Avaya, Microsoft, Dell and Apple.

What is the difference between LAN and WAN?

Networking is the heart and backbone of all information sharing and internet activities of organisations today. It drives and facilitates business communication and other key functions. With a well-designed and configured business network, your business can run as effectively, efficiently, securely and productively as possible. There are two main types of networks – LAN and […]

What is MPLS? How Multi-protocol Label Switching Works and Benefits Business

It is no secret that for companies to function properly and grow in the current digital age, they need to be connected – to the internet and eventually to other branches. This creates a unique problem of how companies can maintain their data network and its security while simultaneously managing costs and increasing productivity. Unfortunately, […]

The Best Voice over IP (VoIP) Solutions for Business

Business communications technology has greatly evolved over the last couple of years to unlock numerous applications and features that are revolutionary – none more so than cloud telephony.